Crush Cancer, benefiting Cycle for Survival, the movement to beat rare cancers, hosted its fourth annual indoor cycling event on Sunday, May 6. The Onelife Fitness on Virginia Beach Blvd was a sea of orange and blue. Both kids and adults alike got sweaty to raise awareness for the cause. Over 400 participants, nearly 20 sponsors and countless donors raised and donated nearly $270,000 bringing the organization’s total funds raised for rare cancer research to over $1 million.

100 percent of every dollar raised through the participants of Crush Cancer goes toward rare cancer research and clinical trials led by Memorial Sloan Kettering Cancer Center, the nation's No. 1 cancer care hospital. Discoveries made have helped thousands of patients; from computers that can more accurately predict patient survival rate to radiation techniques that destroy cancer in the body while protecting vital organs. Locally, the Crush Cancer chapter is leading the way with innovative fundraising techniques.

As the top performing satellite branch across the nation, the Virginia Beach chapter was the first to organize a Kids Crush Cancer team last year, allowing younger activists the opportunity to participate in this one-of-a-kind event. To increase support and exposure, this year’s committee included a variety of incentives to help spread the word - including a social media component on Facebook which raised an additional $7,000 for teams. 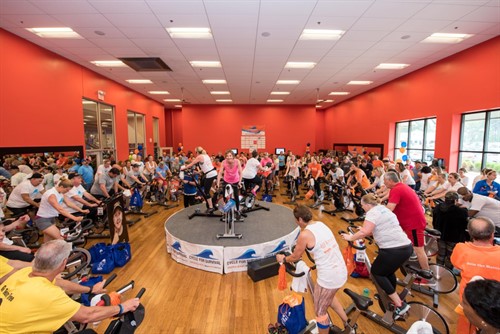 “Raising over a million dollars in the last four years is a true testament to Hampton Roads’ commitment to finding better, more innovative treatments for patients.” Tony Nero, fellow Crush Cancer Co-Founder, also lost his spouse due to rare cancer. “While research remains drastically underfunded, I am humbled by the continued support from local residents and businesses to stop that from being the case.”

Rosemary Wilson and Tony Nero, with the help of colleagues and friends, brought Cycle for Survival to Virginia Beach (locally known as Crush Cancer, benefitting Cycle for Survival) for the first time in May 2015, where more than 400 local participants joined the battle against rare cancers. Since 2007, Cycle for Survival has raised more than $180 million through its signature indoor team cycling events across the U.S. Hosted in more than 20 communities around the country, the funds help pioneer rare cancer research led by Memorial Sloan Kettering Cancer Center, which owns and operates Cycle for Survival.
Join the battle today by visiting LetsCrushCancer.org.

The ESG Companies has been a founding partner of the local event and has participated as a sponsor each year. ESG also sets up a team and its staff, family and friends participate in the event and individually fundraise. In addition, ESG's President and CEO, Andrea Kilmer, and Project Manager, Brittany Jeffries, serve on the organizing committee to help plan the event. Brittany also serves as Co-Chair of the Team Committee and was recognized at the 2018 event as most valued volunteer. Per Mark Rosenfield, the event simply would not have happened without her.

To learn more about the local event, visit LetsCrushCancer.org
In This Section