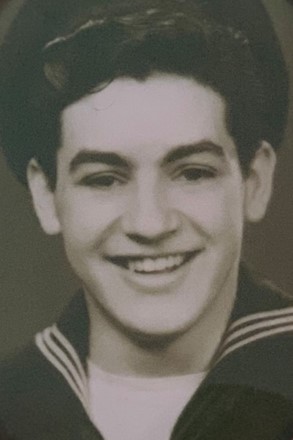 After I’d been onboard USS Arayat for several months, glands started to swell in my legs.  We had no doctor on the ship, only a pharmacist, so the next time we anchored in Papua New Guinea, he sent me in a small boat to the shore.  I went to the medical tent and saw a doctor.  By the time I returned to the beach, the ship had lifted anchor and headed back out to sea, leaving me stranded on the island.

Unsure what to do, I returned to the medical tent, and they sent me to the Officer in Charge of Docks.  He said that the USS Arayat received special orders to leave and that I’d have to stay on the island until they could find another smaller boat to transport me to the ship. He sent me to another tent to see the chaplain who gave me a small package—a bar of soap, toothbrush, toothpaste—and directed me toward the two-story barracks, which was little more than an open structure with a roof and wooden bunks, stacked three high.  I was assigned a place to sleep and given a net to keep out the large malaria-ridden mosquitos that swarmed the island.  When it came time for dinner, I stood in a line with the other service men, who all had mess kits and utensils hanging from a chain on their belts.

When it was my turn to be served, the cook first told me I’d have to get out of line if I didn’t have a mess kit or utensils. I hadn’t eaten all day, and I wasn’t about to give up my spot.  I asked how hot the food was.  He stuck his finger in the potatoes and shrugged.  I held out my hands, and he slapped a spoonful of mashed potatoes into one hand and heap of beans into another.  The juice from the beans ran down my arm as I ate, standing there in front of him.  “Give me another hit,” I said, until I’d had a couple of fistfuls of each and decided to call it a day.  Not long afterward, I found my bunk, checked the net for holes, and went to sleep with no idea how long it would be before I could return to my ship.

I had to learn to acclimate myself as I waited for transport.  I lived mixed in with the soldiers and sailors who were stationed on the massive island that was critical to the Allied strategy.  The engagements in New Guinea split up the Japanese forces and distracted them as the Allies fought to retake the Philippine Islands.  We were right on the Equator, and sometimes it would rain ten to twenty days non-stop.  The mud was like grease, and the terrain was brutal, with vegetation so thick in the jungle that we often couldn’t see two feet ahead.  Japanese fighters were caught up in the hills, and the U.S. government would give natives salt or sugar or other valuable commodities for finding them and bring them down, dead or alive.

Living conditions were primitive at best.  We filled canvas bags and hung them to take showers, standing on a muddy plank floor in the sweltering heat.  We looked at our hazy reflections in the bottom of a tin cans to shave.  We played Pinochle for hours, taking tricks and passing away the days.  The island natives befriended us, and we did what we could to help out.  They typically fished with a bamboo spear with three prongs, and every once in a while, one of the guys would throw a hand grenade into the water, so the locals could happily scoop the fish out.

I spent about six weeks in the rain and the mud and the heat before they put me on a transport ship going north, where I finally reconnected with the USS Arayat.  “Where the hell you been?” the Captain asked when I finally boarded, and the entire crew had themselves a good laugh.  They could laugh all they wanted.  I was just happy to be back.

While we didn’t see any real action on the ship, we did get caught in one hell of a typhoon in the Coral Sea.  For seven days, the water turned like a corkscrew, tossing us about.  I was so seasick that I couldn’t keep anything down.  All but one boy onboard was sick.  I went up to the deck to see if that would settle my stomach.  They tied me in a cot to the davits used to lower the lifeboats to keep me from being blown overboard.  I searched for the horizon, but it was nowhere in sight. When I was a child, my father had described being in a storm so severe that he had looked up and couldn’t see sky, just water overtop the boat.  I thought he had exaggerated, but I looked up into that dark storm and knew exactly what he had seen. We’d roll and pitch and drop into a trough, and I couldn’t see the sky for the water above.

I had a lot of time to think out in the South Pacific.  I thought about my life, who I was, who I wanted to be.  I’d been living a double life before I enlisted, hard-working and true to my parent’s principles during the daytime, and then out late each night, breaking the rules.  One of the guys I’d been running with had already landed in prison. I decided somewhere out there on the ocean, that I wasn’t going back to that, that I wasn’t going to become one of the bums we’d been running with at night.  Whatever joys and trials life brought to my door step, I was going face them like the man my parents wanted me to be, friends or no friends, money or no money.

Besides a little R&R in the wild and wooly territories of Australia, I spent most of the war onboard ship.  The crew often listened to Tokyo Radio.  Tokyo Rose, as we called our favorite female announcer, talked a big game.  Her exaggerated stories of Japanese victories and Allied atrocities were meant to demoralize the Allies and create dissension—like telling the Australians that while they were out fighting in the jungles, the Americans were screwing their wives.  She sometimes warned of upcoming attacks—Washing Machine Charlie will be on your ass by Tuesday—but most of the claims were so farfetched, we just listened for the entertainment.  Plus, she played big band favorites like Tommy Dorsey and Glen Miller, and we clung to those little pieces of home.

The taunting tone changed dramatically on August 6, 1945 when we dropped the atomic bomb, Little Boy, on Hiroshima.  Then it was all fear and confusion.  Three days later, Fat Man flattened Nagasaki.  We needed to end the war.  I knew that.  I understood the danger to our country and to my family.  We had lost Pete, and my brother Donnie had just recently survived the Battle of the Bulge.  We all wanted to see him and Manny home safely.  I wanted to come home myself.  Still I couldn’t reconcile in my own heart the taking of so many innocent lives.

The government said they saved lives with those bombs.  Maybe they did.  But when they dropped the second on Nagasaki, I couldn’t help but think that we were completing our test.  All those tales my father told me as a child of his love for Asian cultures played through my mind.  I knew what it felt like to have lost Freddie and Pete.  I couldn’t imagine the pain those mothers and fathers, brothers and sisters must be going through.  No one could excuse what the Japanese had done at Pearl Harbor.  I cheered our victory against their aggression, but heaviness tugged at my heart.  Our country was built on principles—principles men were dying to uphold.  When we unleashed atomic weapons, it seemed that we had lost something of ourselves.

I wanted our victory as much as anyone else, but the overwhelming force had a hollowness to it, unlike the greatness that came from our goodness, from the strength of our principles and the compassion and understanding we were willing to extend.  Those were what I believed in, the country that I’d been willing to die for, the country that I loved.

Thankfully, General McArthur had enough sense to spare Emperor Hirohito and allow the Japanese Imperial family to keep a degree of dignity intact.  Otherwise, the killing would have continued unchecked.  As it stood, the Japanese surrendered on August 15, 1945, ending the war, and the lucky ones, the survivors, washed home on a wave of victory and relief.

The USS Arayat returned home to Mobile, Alabama through the Panama Canal. With the war over, she was set to be decommissioned.  I was one of the last sailors to leave the ship.  A handful of us tied her up to the dead fleet before I headed home, back to my family, my friends, and whatever endeavor I was about to make of my life.