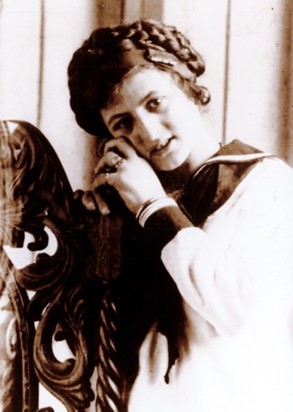 The Great Depression started with a bang on Wall Street in October of 1929, but it took a few years for the suffering to trickle down to the streets of Norfolk. We’d heard stories of people jumping out of buildings—folks who’d lost their fortunes in the market—but those were tales of lives far away, of men and women who had known and lost true wealth.  That wasn’t the case in our immigrant neighborhood.  I didn’t know anyone who had lost money in stocks.  What the laborers of my neighborhood lost was opportunity.  They lost homes.  They lost jobs.

Collectively, they lost hold of their dreams.

No matter how little we had, Mama always found something to give.  She’d easily hand out our few possessions, but more than that, she gave of herself.  People called on her often to settle disputes, nurse a sick neighbor, or hold a woman’s hand through a difficult delivery.  Once, when I was about five, the housekeeper from St. Mary’s rectory came to our door with flushed cheeks and fast breath. “Mrs. Garcia!  Come quick.”  Mama grabbed my hand and rushed out in such a hurry that my feet barely touched the brick sidewalks and cobblestone road.

The priest met us at the entranceway to the rectory.

Father always caught my attention—part of his jawbone was missing, so his face was real unusual to a child—and on this day, he held a sleeping baby in his arms. He motioned to an old woven basket like the one Mama carried to market.  “We found her crying on the rectory steps.”  My mother reached to take the child who was wrapped in a dirty blanket, but the priest waved her off.  “I need you to find her mother.”

The baby, like the priest, had a disfigurement on her face and a misshapen lip. Mama circulated word about the abandoned baby and organized a neighborhood search.  We went door-to-door but found no trace of the missing woman.

“What are we going to do?” the priest asked when we returned.

My mother tucked the dirty blanket under the infant and said we couldn’t leave her there.  “I’ll take her and pray that her mother turns up soon.”

Father smiled and handed over the baby.

Mama carried the newborn home in the basket, and I tagged along beside.

The little girl squirmed in our living room as my mother convened an emergency meeting of the Daughters of Isabella.  My mother was always president of something, and at the time, she served as president of the local chapter of the Catholic women’s group whose motto was Unity, Friendship, Charity.  Most of the members were poor with small children of their own. They all agreed to help care for the baby in their homes.  They went and knocked on doors and asked for donations of bottles, clothing, and diapers.  They set up a rotation schedule of care with Mama going first.  Word of the arrangement spread and more babies appeared on the rectory steps.

The ladies made it clear that they would only accept infants.  They took over the recreation center at the Knights of Columbus building alongside the Catholic grammar school and lined the room with donated cribs and supplies. The women took turns volunteering at the center, and the nuns helped out in the evenings after they finished teaching school.

Later, when the Catholic grammar school closed, the nuns moved the babies into the school building and took over their care fulltime. It was known then as the St. Mary’s Orphanage.   With all the hardship of the Depression, the sadness of those children who had lost their families along with everything else laid heavy on my heart.

Life was always a complicated mix of emotion, pain and joy, darkness and light, and I held that sorrow alongside the joy and pride I felt for people like my mother and her friends who had the courage to step in and help out.   Years later, after the war, the home officially became St. Mary’s Infant Home and, later still, St. Mary’s Home for Disabled Children.  The nuns are credited with starting the institution.  They played an important role, but I was there when the idea began on the rectory steps.  I witnessed firsthand a small, dedicated group of women, led by my mother, who refused to allow an abandoned, disabled little girl to slip through the cracks.