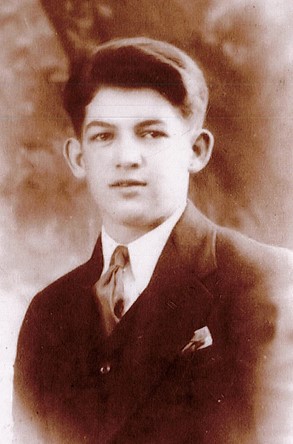 Times were different back then, and my daddy taught us boys to throw a punch as soon as we could make a fist.  We were never to start a fight, but never to run away from one either.  He expected us to protect ourselves, to stand up, but never to intimidate.

Papa hated bullies.  He despised them.  It was a hard and fast rule in my family:  we couldn’t hit a smaller kid—no matter what.

Kids could be cruel, but not in my family.  My daddy would slap any one of us if we called a girl cockeyed or a boy bowlegged.  Not only could we not say anything, but we had to take up for people if they had any kind of handicap.  And we weren’t allowed to let someone intimidate us either.  “You let a bully get the upper hand,” Papa always said, “it’s not just you at risk, he’ll go after someone else too.”

No one took up for others better than my brother, Freddie, eight years my senior.  He’d lost an arm to an oncoming Model T, but he never let it slow him down.  Freddie could drive a stick shift, knot a tie, haul bricks, and throw punches with the best of them.  Kids may have teased him about his stub, but not that I remember.  Far as I recall, no one picked on him for anything—or on anyone around him either.  Maybe it was the isolation of losing a limb or the lessons that our father drummed into our heads, but whatever the reason, Freddie defended the underdog at any cost.  He became the unofficial protector of the Jews in our immigrant neighborhood.

One beautiful afternoon in July, my sister Anna and brother Manny and I walked home through the outdoor marketplace after a movie at the Strand Theater.  People yelled at us by name in the street and told us to run on home.  As we passed the intersection of Fenchurch and Holt (they used to intersect back then), water flooded the drainage ditches and glistened on an otherwise dry road.  We took that as an omen for some reason that something terrible had happened and ran the rest of the way to our house.

We never expected what we found.  Our brother Freddie was dead at sixteen.  Mama was distraught. My brother had left confession at St. Mary’s and stopped to talk his friend, Tony, on the sidewalk, when the tires of a city bus caught on a drainage ditch, and the driver lost control of the wooden steering wheel.  Tony leapt aside, but Freddie had his back to the bus, and it smashed him against a stone wall.  Freddie’s blood and brains had to be washed away by a fire truck.  Mama had run to the scene, seen this, and flown into a rage.  She’d fled to the grocery store, grabbed a butcher knife, and threatened to go after the driver.  My father vowed revenge.  It was an accident, of course, the bushings failed on the bus, but grief overcame my parents.  Thankfully, the bus driver hightailed it out of town.

Freddie’s battered body was prepared by the funeral home and then brought to our house. I was seven, and my brother was the first dead person I’d ever seen.  Mama set up a vigil, and had him placed in a bed with candles burning around him. My brothers took turns overnight, kneeling and praying at his side.  Freddie had always been special to my parents—special to the family.  My oldest brother, Pete, was the hardest worker, but he never drew the praise that Freddie did.  Freddie’s arm stump and strong spirit made him unique.

The shock of his death spilled out into the city. The Jewish, Polish, and Italian communities within our neighborhood bonded together in pain.  At his funeral, bearded Jewish men in traditional black dress and yarmulkes lined the aisles of our Catholic church.  That was unheard of at the time, but my brother had earned their love and respect.  The Jews in our neighborhood took a lot of abuse and were mostly passive about it.  Freddie was not.  He’d beat anyone who dared call them names, using his one good fist to back up his beliefs.  So the Jewish men flocked to his funeral, paying final respects to the young man who had fought for them and their children.

Our neighborhood back then was segregated along immigrant lines, with each group playing a distinct role.  The Irish ran the community.  The Jews had the money and the retail. The English had the reputation.  And we Italians were the builders, the pipe layers, the brick workers, the tradesmen.  Freddie had taught me respect for everyone and especially for the closeness of the Jewish community.  “See how they stick together,” he’d say.  “In family and in business.  They give each other their time and their money.  They work hard, and they work together.”

Of course, Italians worked hard too.  Everyone did.  We had to.  And the Italians I knew stuck together in family matters, but business was a different story.  They’d do business together, just not go out of their way to help one of their own get started. Freddie’s observations stuck with me, and I hoped to one day be able to help others. It always seemed that Freddie had the world all figured out.

After his death, my mother wore black for years and prayed nonstop to the Blessed Virgin.  While she still prayed to God and revered Jesus, it was Mary who inspired and comforted her. She had no doubt that Freddie’s spirit would rise and that she too would overcome.  Mama, like the rest of us, was a survivor.  I learned a great deal about her during that time.  I walked in her strength.  She endured Freddie’s death just as she had all of the hardship in life—with faith.

Even in the midst of her pain, Mama found God’s blessing in everything.  If someone broke a leg, she’d say, “See, God blessed you.  You could have lost your leg, and now it’s only broken.”  The heartache of losing my brother tested but failed to break her.  If anything, the depth of the loss strengthened her soul.

I mourned my brother as well—he was just so special—but before long, our personal tragedy gave way to a public one. The Great Chesapeake-Potomac Hurricane flooded the area in late August of 1933, a few weeks shy of my eighth birthday.   Norfolk didn’t have a good drainage system, so City Hall Avenue and Bank Street flooded deep.  Vegetable boxes floated in the street and furniture rose to the ceilings in some of the houses.  I had to be careful where I stepped because some spots were over my head.  A full-grown man almost drowned and another did die when he stepped into a puddle in Portsmouth where a live wire had fallen in the debris. Already devastated by the Depression, our neighborhood fought to recover from the hurricane as my family continued to struggle with Freddie’s loss.

Sad as I was, I figured Mama was right about God’s blessings.  It wasn’t a matter of whether or not they existed, just whether or not we were willing to open ourselves up when they came our way.  So life became a test of sorts, an endless quest in search for silver linings.